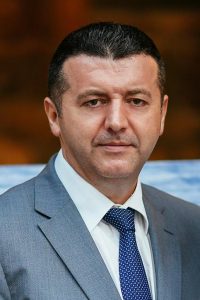 Dr. Orhan Dragaš is a Serbian expert on security and international relations. He is the founder and director of the International Security Institute, based in Belgrade. He is the author of numerous expert articles, newspaper columns, as well as the books “The Modern Intelligence-Security Community, Utopia or Reality” and “Two Faces of Globalization – Truth and Deceptions”.

He is married to Nena, with whom he has four children, a daughter Anđela and sons Luka, Andrej and Stefan.

Dr. Orhan Dragaš is the founder of the International Security Institute, based in Belgrade. This expert, non-governmental organization (Think tank) brings together experts in the fields of law, security, diplomacy, economics, communications … and cooperates with numerous governmental and expert organizations in Serbia, the Balkans and Southeast Europe. He is involved in research and consulting in the fields of politics, security and international integration, especially the EU and NATO.

Dr Orhan Dragaš is the European Commission’s (EU) expert for migrations and internal affairs. He is member of Chatham House (UK), The Royal Institute of International Affairs and member of RUSI – Royal United Services Institute (UK).

In early 2005, he founded the Faculty of Diplomacy and Security, the first of such profile in Eastern Europe. As lecturers, at the Academy have worked the most influential professors, scientists and researchers from Serbia and the countries of the region.

He publishes interviews and columns in the media in Serbia and the Balkans, on current political, economy and security topics, as well as articles on international relations and security in scientific journals and within expert conferences.

Dr. Orhan Dragaš in 2009, published a book, “The Modern Intelligence-Security Community, Utopia or Reality”, which in 2018 had a second, revised and amended edition and serves as the literature for teaching international relations and security at universities in Serbia and Eastern Europe.

In June 2019, he published the book “Two Faces of Globalization – Truth and Deceptions”, which had in the fall of the same year a second, supplemented edition, as well as edition in English. This study deals with the state of globalization and its aftermath ten years after the global crisis of 2008. The author of the foreword is Tamas David-Barrett, a professor at Oxford University, with reviewers Steve H. Hanke (Johns Hopkins University), Martin Wolf (The Financial Times), Emre Alkin (Altinbas University, Istanbul), Neil Dooley (Sussex University), Daniel Lacalle, Jonathan Grant (King’s College), Zhang Jiadong (Fudan University)…