The new book by Dr. Orhan Dragaš, dedicated to globalization, was presented to members of the Government, diplomats, media editors, scientists and business people

The new book by the director of the International Security Institute Dr. Orhan Dragaš, entitled “Two Faces of Globalization – Truth and Deceptions” was presented in Belgrade in the presence of members of the Serbian government, foreign diplomats, editors of the largest media, scientists and researchers, as well as representatives of large companies. “Two Faces of Globalization – Truth and Deceptions” is a study dealing with the state of globalization in all its aspects today, a decade after the global financial crisis, and it followed as a result of his post-doctoral studies at the prestigious London School of Economics and Political Sciences.

Presenting his research, Dr. Orhan Dragaš said that globalization is not threatened today, 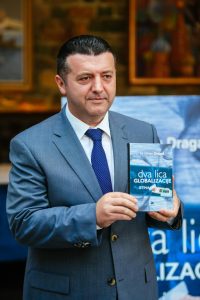 that it changed its forms and intensity to a certain extent after the crisis in 2008, but that it cannot be reversed or even stopped. “It is a process, not an ideology, a process that is generated by technology, economics and political decisions, and therefore it is impossible to resist it and try to stop it, but it is necessary to adjust sails to its winds,” the author said.

The book deals in detail with the state of globalization today, especially in the United States, the European Union and China, as economically and politically most influential actors of globalization, as well as the range of populist movements around the world as factors of endangering and slowing down global integrative processes as well as the impact of conflicts and new communication technologies on today’s globalization.